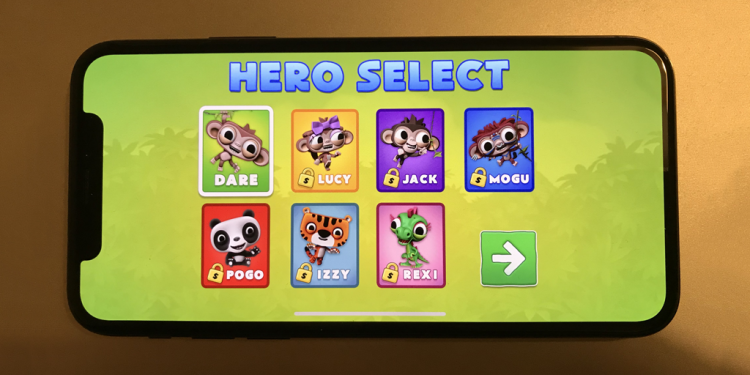 Dare the Monkey went live three months ago and for the first month, the money it was making from in-app purchases was pretty disappointing. Want to know if I could turn it around? Then read on.

I knew something was wrong pretty quickly. A few weeks in and I could see that the revenue being generated by my game’s ads was significantly higher than the revenue from in-app purchases. It was approximately a 90-10 split in favour of ads, which didn’t seem right.

The ad revenue was actually really impressive. It was more than I’d predicted and justified the time and effort to integrate. Dare got an App Store feature at the start of January and the sharp spike in impressions resulted in a much welcome boost in ad revenue. However, the money from in-app purchases remained limp in comparison.

After pouring over the analytics I could see that only half a percent of those who downloaded the app were going on to make an in-app purchase. I’d hoped for an in-app purchase conversion ratio of anywhere between 2 and 3 percent, so this was extremely disappointing news and was a clear indication that something was wrong.

I decided to do something about this. After all, if I could even push the needle from 0.5 percent to 1 percent I could potentially double what I could make from IAPs.

So why exactly were user’s failing to make purchases? I wasn’t exactly sure but I remembered the story of Punch Quest, which had similar problems getting players to spend money.

In Punch Quest’s case, they got something very fundamental wrong – the game’s ‘shop’ button just wasn’t large enough to attract the player’s attention. Many players just weren’t aware that IAPs were available and I strongly suspected Dare was having similar issues too.

So I sat down and thought about how best to improve the visibility of my IAPs. I came up with a plan that included some simple things such as increasing button sizes, to larger changes that did a better job of up-selling various items. I spent a few weeks implementing the changes and released version 1.0.3 of Dare the Monkey at the end of January.

It’s a big win and I’m so glad I put the effort in to fix things. For only a couple of weeks work, I’m now seeing something closer to a 50-50 split between ad and IAP revenue. And I even have a few more plans to try and push the needle further in favour of in-app purchases. So if you’re working on your own indie game and you feel your IAP strategy is failing then don’t give up. A little bit of effort is all that’s needed to help change things.

I’ve run out of space in this post, but I’m going to write a few more posts that will talk about the actual changes I made. Hopefully you guys will find them useful.

Until next time. Thanks for reading!