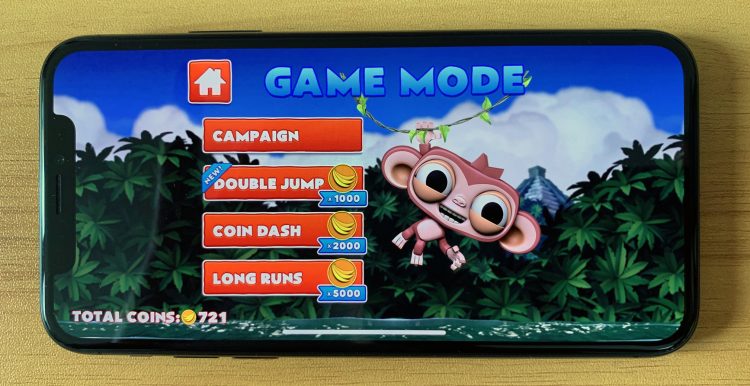 I decided very early in production that Dungeons of Doom would have only one game mode. Why only one mode you may ask? Wouldn’t multiple game modes keep people playing longer, increase retention, and drive revenue? Well that was exactly the plan when building our previous game – Dare the Monkey – but in our case the analytics just didn’t support this.

Dare the Monkey had four different game modes. Each had multiple levels and they were all designed to keep the player engaged for as long as possible. The primary mode was the game’s main campaign and the hope was that players would spend the majority of their initial game time there before discovering and moving onto the other modes. In reality, the additional game modes failed to do this. So why was this and what lessons did we learn?

The first thing we learned was that the majority of casual gamers download a game, play it for a very short period of time, then immediately move onto the next thing they discover. It’s no real surprise. Let’s be honest, we all do it.

Those who loved the game would spend a huge amount of time playing through the main campaign. However by the time they had completed it they were typically burned out and were satisfied to move on to something else.

There was a demographic who enjoyed the main campaign but found it too challenging and were unable to complete it. You’d think the additional game modes might suit them but this is where our biggest issue seems to crop up. Most players would rarely navigate beyond the main campaign interface, or if they did they didn’t seem to spend much time with any of the other modes.

We did try many fixes to rectify this. The other game modes were tweaked over time, the difficulty of each was lowered, and we made various changes to the UI in an effort to make the other game modes more visible. We even tried sending push notifications to players in a bid to drive them to the other game modes. However, in the end, none of these changes had any meaningful effect.

Ultimately, the additional game modes were a huge investment in time for what turned out to be very little revenue. Almost all of the game’s revenue came from the main campaign. To be honest, we could probably have spent that time increasing the size of the main campaign, which would have no doubt generated us much more revenue than the other game modes did. Or alternatively, we could have just pushed Dare the Monkey to market six months sooner and probably come away with roughly the same revenue.

For those reasons we’ve decided to just have a campaign mode in Dungeons of Doom and put all our focus into making it as great an experience as possible. Hopefully it’ll reduce the development time without impacting the amount of money we can make from it. Plus, a more streamlined experience will hopefully make Dungeons of Doom an overall more focused experience for the players.

Posted by: AlanDate: 20th May 2021 Categories: General
Why I switched to Substance Painter
Good UI is Hard