Is Apple TV Worth the Effort?

As you may know, we launched the freemium version of Dare the Monkey on Apple TV in tandem with the iOS version. However, what you may not know is that we debated over whether to create an Apple TV version at all. Was it going to be more effort than it was worth? Well read on to find out.

Being acutely aware of the limited time we had available until our scheduled launch date, and also being unsure of how much revenue we might be able to make from an Apple TV version, we decided to release a slightly less ambitious version of Dare for it. I’ll be honest, I really didn’t hold out much hope of Dare doing much on that platform.

We opted for just the game’s main campaign mode, which consisted of only 12 levels. We’d projected a large slice of our revenue would come from players unlocking levels they were stuck on, so having approximately 40 fewer levels than the iOS version was a worry. In addition, due to some technical issues with the development tool we were using, we were unable to incorporate any character select options meaning the user could only play as Dare himself rather than purchase and play as one of Dare’s tribe members.

All this left the Apple TV version fairly light on revenue generation features. I also struggled to find any ad networks willing to support tvOS, which again would lead to less revenue.

Even with all these things counting against it, I still felt it was worth a shot at releasing on Apple TV. After all, I had read that Apple TV users are more willing to make in-app purchases and my friend who runs his own games company had also told me that he makes a decent amount of revenue from one of his Apple TV games.

4% of my downloads have come from AppleTV. This might not sound like a lot but it’s significantly more than I thought I’d see. Let’s be honest, how many of you guys actually own an Apple TV? In fact, how many people do you know that have an Apple TV? I bet it’s a very small number. So as far as I’m concerned that download number is significant. Apple has very generously featured Dare the Monkey on Apple TV throughout the year, and it seems to consistently sit within the Top 100 free apps on the App Store. That increased visibility has no doubt really helped. 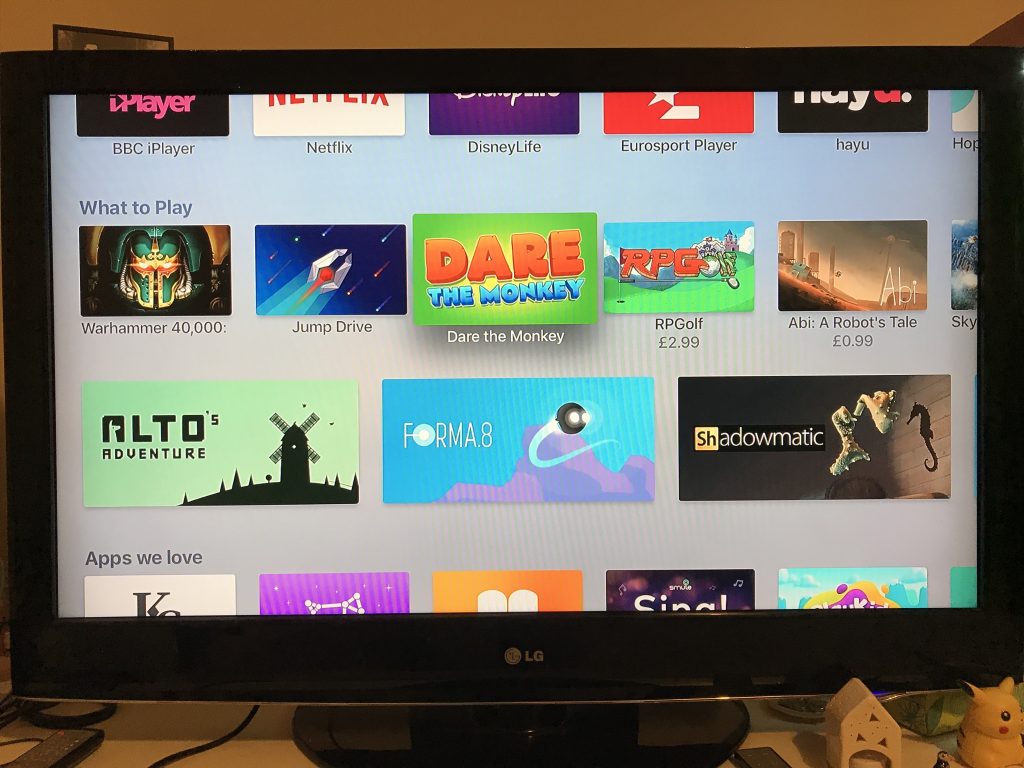 The AppleTV version has seen some love from Apple. Grateful.

What was even more surprising though was the revenue. Even in its current stunted state I was astounded to see that approximately 15% of all my in-app purchase revenue comes from AppleTV! That’s right, 15% of my revenue comes from 4% of my users!

So the gamble paid off, and yes it was worth doing. In fact, to be honest, I really should revisit the Apple TV version and try and get some more revenue generation features in place 🙂

Put simply, iPad and Apple TV users are much more likely to make an In-App purchase compared to iPhone users.