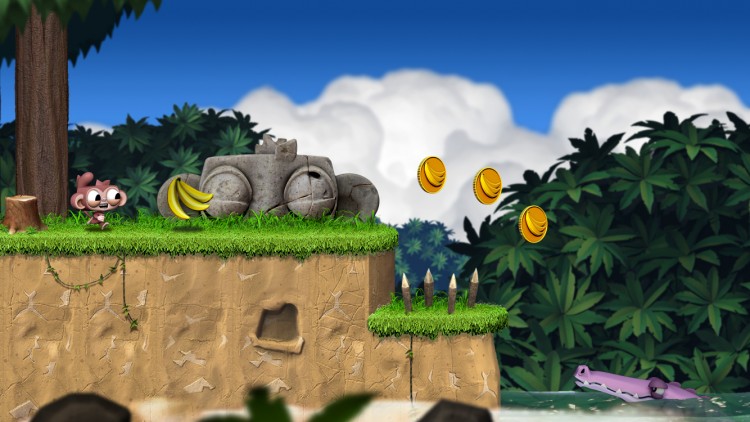 Hi! My name is Alan and I’ve been beavering away on my first independent mobile game for the best part of a year. It’s called Dare the Monkey and development has moved into the final stages.

It occurred to me recently that I’ve more-or-less been working on my game in secret and thought it would actually be a good idea to share the remainder of the project with everyone via this blog. I also thought it would be beneficial to anyone else thinking about making a game if I also went back and talked from time-to-time about the development and design that’s already gone into it.

So to kick things off here’s a screenshot showing how Dare the Monkey currently looks. I’ll be posting plenty more images over the coming months. As you can probably tell, my game’s been driven by my love for 80s and 90s platform games such as Mario, Sonic, and Donkey Kong. I want to create my own platformer but modernise the concept and hone it to work on mobile.

It’s something I feel hasn’t been done that well in the past. Sure, there’s been mobile conversions of classics such as Sonic the Hedgehog but to be honest they’ve mostly lost something in the translation from joypad to touch. You can’t just take a game designed for console and drop it exactly as is onto a mobile device. Sega’s own attempts to modernise the concept with games such as Sonic Dash and Sonic Runner, although visually stunning, left me feeling flat. They seem to have been designed to extract as much money as possible from the player and have largely forgotten about the actual gaming experience.

My aim is simple. Make the very best game I can with the time and resources I have. I know I’m just a one-man team but I’m a skilled 3D modeller & animator, I’ve worked in the games industry before, and I’m extremely passionate about what I do.

Come the end of this project, I’m confident I’ll have a very enjoyable mobile game that, not only looks gorgeous, but also embodies the spirit of classic arcade platform games.

Hopefully, the screenshot above will convince you that I’m on the right path.