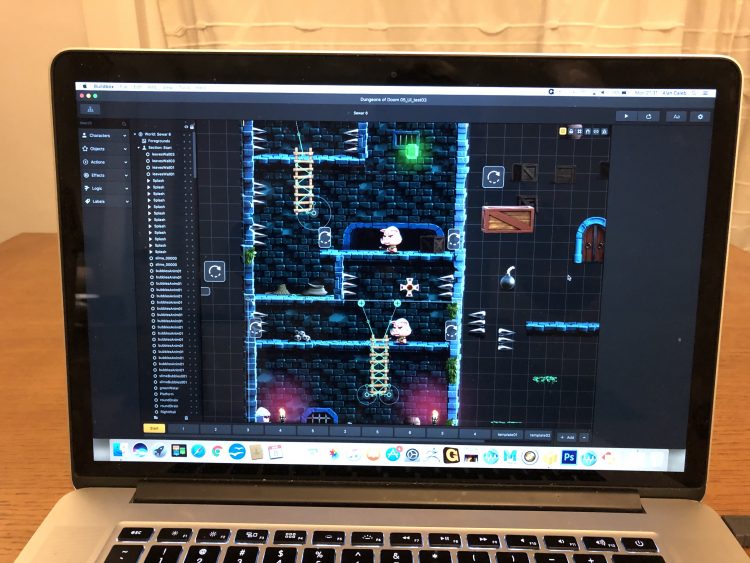 When I think back to some of my favourite childhood platform games one thing stands out in my mind more than others – Ladders! Back then ladders were an integral part of the platforming experience, one which is sadly neglected somewhat these days.

When designing Dungeons of Doom I wanted to tightly integrate ladders into the gameplay in a similar vain to classic games such as Donkey Kong and Ghouls n’ Ghosts. In these games timing is everything. The player would need to wait for the perfect opportunity to ascend or descend the ladders while dodging bouncing barrels or flying vulture and fearsome zombie attacks.

Even well into the mid 1980s and 1990s ladders were still a mainstay of video games. 8 and 16 bit classics such as Jet Set Willy, Rick Dangerous, and Mario led the way and I still fondly think of them to this day. With that in mind I was determined to add ladders to Dungeons of Doom even though it initially seemed out of place in a tower jump game.

Ultimately adding ladders proved to be more challenging than expected from both a gameplay and technical perspective. I’d never given any thought to the mechanics of adding ladders to a one-touch styled game and I had several technical problems to solve. How do I get the player character to exit the ladder facing the same direction as when he started climbing it? How do I ensure that once the ladder has been used it can be reset and used again if the player jumps back down on to the previous floor. Other issues cropped up like the ladders sometime refusing to activate when the player wanted to climb or worse still bugs where the player would just get stuck half way up and refuse to climb any higher.

In the end it was far more challenging and time consuming than I had imagined but I’m glad I persevered as the addition of ladders really adds an extra dimension to the gameplay and also I think they look really cool! Looking forward to sharing more details as we push on with the development of this one.