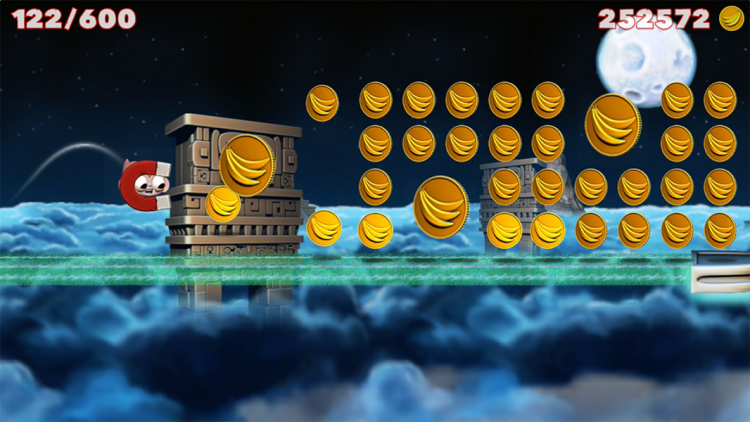 Way back when I started working on Dare the Monkey my intention was to make a game with nine increasingly difficult levels and that was it. However, about a year and a half into the project I started to think about ways to keep the player interested for longer and from that the Coin Dash mode was born.

Now based on the most recent feedback, it’s clear those who’ve play tested the game want even more Coin Dash content. So here’s what I have planned.

Before I continue, I guess I should explain what a Coin Dash actually is. Each Coin Dash has you trying to collect a certain number of coins in order to complete the level. Okay, it doesn’t sound that challenging but Dare continually picks up speed as he runs making things much more frantic as you desperately try to grab a few more coins in order to complete the level. Touch even one spike, collide with a single rock, or crash into any of the level’s occupants and it’s game over. And there’s also a whole host of other gameplay elements in there too, such as coin magnets, a double-jump power-up, a rocket boost, and a bunch of extra collectible items.

Originally the Coin Dash was a fairly modest game mode with only nine additional levels themed on the game’s Jungle world. But the first thing everyone who completes the Coin Dashes asks is ‘where’s the other levels?’. They want to know where the Coin Dash levels are for the Lava and Aztec worlds from the game’s main campaign.

To be honest I just hadn’t anticipated the Coin Dash mode being as popular as it is and had made a conscious decision not to spend too much time on it. However, I’d be mad to simply leave things as they are. The feedback has just been too good for me to ignore. And as you’ll remember from my previous post, in order to make any kind of decent revenue from serving ads in Dare the Monkey, I’m going to need to maximise retention and session times as much as possible. The Coin Dashes will no doubt help out in that regard.

So here’s what I’m going to do. I’m extending the Coin Dash mode from nine levels to 36! I’ll be adding nine new levels themed on the Lava world and another nine based on the Aztec world. And remember, I’m also working on a brand new Snowy Mountain world for the main campaign so there’ll also be nine Coin Dash levels based on that too.

So I know what you’re thinking, is he ever going to get this game over the finish line? Well I’ve actually made really great progress over the last month or so. 27 of the planned 36 Coin Dash levels are now in there, with only the nine from the Snowy Mountain world to go. So definitely getting there and I’m glad I’ve spent the time taking on board user feedback.

It’s very easy to make a game in isolation and not take any advice. However that would be a mistake.