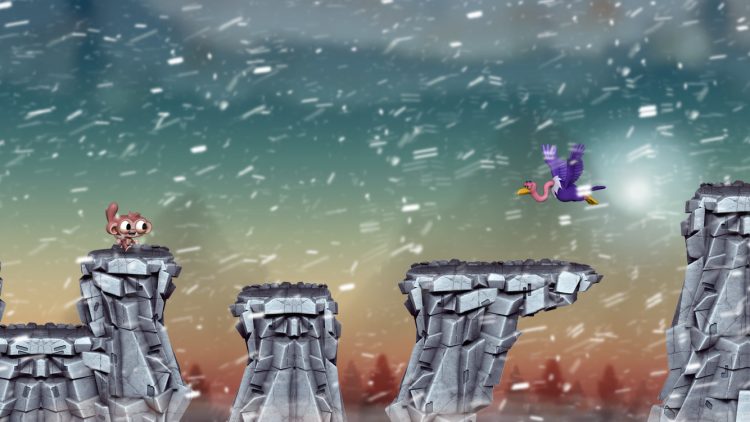 If you’ve been following me on Twitter you’ll have noticed that I posted an image from a new game world I’ve been working on. So why am I adding an extra world to Dare the Monkey so late in the day?

Dare the Monkey’s main campaign consists of 9 levels spread across three game worlds. It may not sound like a lot but given the hardcore nature of the game it’ll take even a good gamer quite some time to get to the end. In fact, there’s a few weeks worth of game time there just to cover those 9 levels.

However, as I said in my previous post, I’m trying to make the game a little easier for average gamers. The problem with doing that is I run the risk of reducing the overall time someone will spend playing the game – basically people will get to the end quicker and I really want them to enjoy Dare for as long as possible. So an extra world will push the main campaign’s number of levels up to 12 and hopefully keep people playing for the same length of time at the very least.

The other reason for adding a new game world is the number of requests I’ve had asking for this during beta testing. Now in many ways the feedback is odd because no one who has ever asked for more levels has actually completed the game. In fact, most don’t even get past the second game world. It’s really a perception thing for these gamers and I strongly suspect that it will determine whether someone decides to download the game from the App Store or not.

In most peoples minds, a total of 9 levels (three game worlds) is simply too few, whereas 12 levels (4 game worlds) seems like more bang for their buck. It’s also the same number of levels that Mr Jump launched with and again that felt about right when I first started playing it. I had actually toyed with adding two extra worlds but I just couldn’t see myself ever finishing Dare the Monkey if I committed to that amount of additional content.

So there you have it. A new game world is in the works. Let me know what you think of the rough image and Ill show off some more screenshots as the new levels get fleshed out.